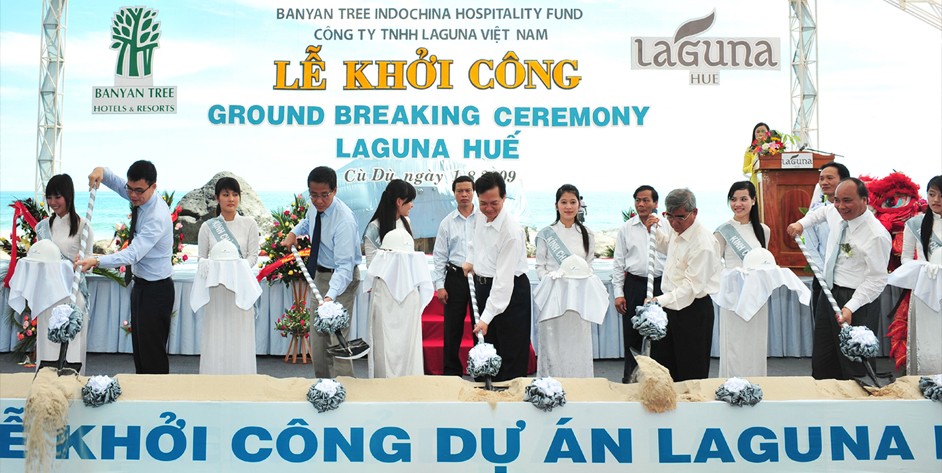 It’s expected that this project would be developed in four phases. As finishing, Laguna – Hue will have seven luxurious hotels with 2,000 rooms, more than 1,000 apartments, Spas, shopping area, international conference center, golf-course, entertainment venues and more other item to tourism development. Phrase 1 of this project consists of two resorts, a 18 holes golf-course and apartments for sale, expected to be completed in the late of 2011.

Prime Minister Nguyen Tan Dung also took part in to the breaking ceremony of Sai Gon – Chan May Non-tariff industrial Zone Project. It has total investment of 1,279 billion VND, with total area reached 657.78 hectares. This project will be implemented in 2 phrases, investment in the first phrase is 639 billion VND, will be finished in the late of 2014.

Speaking at ground breaking ceremony of Sai Gon – Chan May Non-tariff Industrial Zone, Prime Minister expressed that Chan May – Lang Co Economic Zone will have the conditions to develop, being a good area for investors doing business. This area has the advantages such as: natural scenery, located on series of world heritages of the Central, Lang Co Bay is a member of the club of the most beautiful bays all over the world, located between two international major airports and two big city are Hue and Da nang, where in the near future will be in priority to construct north-south expressways and high-speed rail (The Hue- Da nang will be deployed soon)

The Prime Minister also suggested Thua Thien-Hue province together with investors research to build vocational training centers contributed to the training of human resources for the economic zone and to create conditions for people in the region have the opportunity to work in the company, the plants of economic zone in the future.

Chan May-Lang Co Economic Zone is one of the 13 economic zones set up by the Government’s decision, with opened policies to attract investment along with the efforts of Thua Thien - Hue province in construction of infrastructure. After three years up to now, this economic zone has had 33 licensed investment projects with total investment of over 31 trillion VND, equivalent to nearly $2 billion. In which there are 10 foreign direction investment projects with total registered capital of U.S $1.4 billion.